Across the world, major cities are proposing variations of a “15-minute city” idea.

It’s a simple concept: make it easy to meet all daily needs in a 15-minute radius. Build things close enough that you can walk, roll or hop (onto public transit). 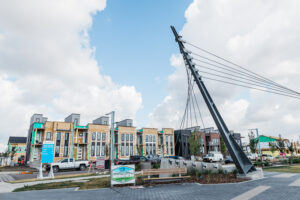 Build it and they will come

For decades, most cities have been building roads. Amazing roads. Better and more efficient roads.

The result isn’t what you’d think. Instead of easing congestion, wider and faster roads usually mean more traffic. Why? Because they make more people want to drive!

But roads aren’t cheap. They mean congestion and long commutes. Accidents and wear and tear on vehicles. Increased air pollution and emissions. Expensive infrastructure that needs regular maintenance and improvement and gobble up city budgets.

And one of the biggest problems is that they leave less room for anything else.

“Cars are space-inefficient,” a recent BBC story notes. “They take up seven times the space of a bike but usually carry only up to five people. Often this number is much lower – and that’s only when they’re moving.” 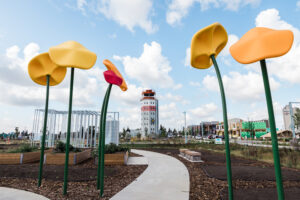 From congested roads to great streets

The idea of 15-minute cities breaks this cycle of roads and traffic.

Instead of building around vehicles, they focus on neighbourhoods, communities and districts.

It’s something Edmonton is attempting to address in The City Plan, which proposes 15-minute districts throughout the city. In every part of the city, there are important streets and hubs where people can meet most daily needs.

Instead of trying to rebuild around existing arterials and freeways, Blatchford is designed to give residents freedom. Within a 10-minute walk, there’s already a grocery store, coffee shop and restaurants. A micro-brewery is literally across the street.

Blatchford really exemplifies the 15-minute idea. Bike lanes, walkways and park space make it easy to get outside. In a couple of years, there will be an LRT station and brand new retail space.

So a 15-minute neighbourhood will mean Blatchford residents have a very different problem: what to do with all that extra time?