With the start of the 2022 spring construction season just around the corner, it’s a good time to reflect on the development milestones that have gotten us to where we are today. As we continue to bring Edmontonians up to speed on the future of our community, here are some of the moments from the past few years that have moved us forward as we work to achieve Blatchford’s exciting vision.

In 2014, the City of Edmonton broke ground on the first patch of soil at the former City Centre Airport – now the neighbourhood known as Blatchford. Portions of the site were deconstructed into a clean slate as buildings and runways were removed and recycled to free up 536 acres of unlimited potential in the heart of Edmonton. In a nod to the site’s aviation history – and a creative way to reuse materials – the bases of new benches in the community are made up of old runway materials. 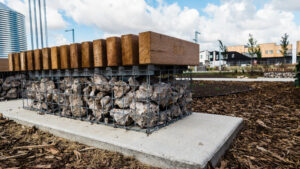 Energy sustainability is a key pillar of Blatchford’s vision as we work to be a carbon-neutral neighbourhood powered solely by renewable energy. Over the past few years, a brand new utility has been built from the ground up – literally. Underneath the first stormwater pond in the community, the utility drilled 570 boreholes down 150 meters to provide a renewable source of energy for the community-wide District Energy Sharing System. This underground geoexchange field feeds into an Energy Centre which then transfers thermal energy to the homes and buildings in the community. From -40℃ to  +40℃, this new system has been providing reliable heating, cooling and hot water services to the first residents. 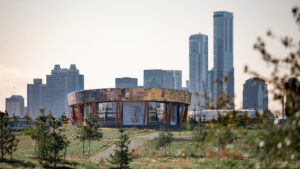 As the land developer, the Blatchford Office is uniquely positioned to keep the long-term vision in mind, recognizing that it takes time to do things differently. By creating an energy efficient, high-density neighbourhood right in the city core, Blatchford will play a key role as Edmonton plans for another million residents in the next few decades.

With a site the size of all of Downtown Edmonton, the community will be built in multiple stages –  with good things built into every stage. The first stage of the neighborhood features community gardens, a playground, amenity space, heritage features, bioswales and the first part of a separated bike lane that will eventually run the length of the west side of the site.

Home builders have also been busy on site constructing their energy efficient homes, with the first residents having moved into the community in 2020. From this point forward, Blatchford was no longer just a concept but a reality as this new community took flight in the heart of Edmonton. 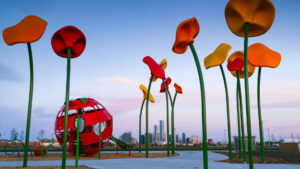 With spring just around the corner, we are busy preparing to kick off a busy 2022 construction season. Crews are scheduled to finish up the land development work in the first two stages, including installing utilities, building roads, and installing landscaping and lighting. They are also preparing to start work on the next two stages of the community, which will get the land ready for homebuilders to build more townhouses and apartment buildings. Planning is underway for the design of another small community park just a few minutes walk away from the current Littlewood Park. Development of the east side of the site to accommodate NAIT’s campus expansion into the community is also being planned. 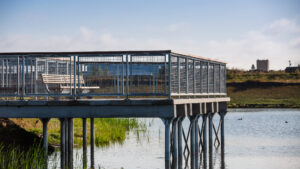