Blatchford is being built on design principles that will not only keep us on track to achieving our vision, but which will also help us create a unique neighbourhood in Edmonton. One of these planning principles – history – means making sure the history of the site as Canada’s first municipally-run airfield (#YXD) is embodied in initiatives throughout the community!

One of the biggest ways to honour the aviation past lies right in the community name. Blatchford is named after Edmonton’s former mayor, Kenneth Blatchford.

Kenneth arrived from Manitoba to the Edmonton region in the 1880s. He worked odd jobs selling newspapers, operating a gristmill and selling insurance before entering politics. After serving as a Councillor, he became Mayor of Edmonton in 1923. Kenneth used his influence to make the case for a permanent airport to be built in the city. Thanks to his advocacy, Edmonton became the first municipal airfield in Canada. Originally dubbed Edmonton’s “air harbour,” the site was eventually renamed Blatchford Field in his honour. 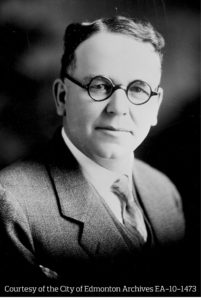 All roads, lanes, walkways, parks and plazas in Stage One are also named after notable individuals in Edmonton’s aviation history:

The first stage also features two heritage features – ‘Arrival Gate’ at the entrance into the community off Airport Road and ‘Takeoff’ inside the roundabout at the intersection of Alpha Boulevard and Blatchford Road.

The community will feature commemorative plaques throughout, allowing residents and visitors to always remember the contributions made to Edmonton’s aviation history by these legendary individuals.