With walkways outside your front door, a linear park, easy access to downtown and architecturally-crafted green homes, we know there is excitement building to be a part of this kind of urban lifestyle in Edmonton. We are currently in the process of selling the first twelve parcels of land in the community to home builders that share our vision for a one of a kind community.

The land currently being sold to builders will house townhome units, condominium style townhouses and two 4 to 6 storey residential buildings with potential for ground floor retail.

The first homes for sale will include 52 fee-simple townhomes, each with a private backyard and laneway access to a garage. Many units have the potential for garage suites or other accessory suites, expanding affordable housing options and opportunities for multi-generational living! It won’t be long before we are able to announce who our very first Blatchford builders will be. From there, interested homebuyers will be able to contact builders directly to find out more about the homes, including prices and when homes will be available for purchase.

More information on the first stage of development can be found at BlatchfordEdmonton.ca/homes.

Now that the snow is flying, construction work in Blatchford is shifting with the seasons. Major milestones reached in 2018 include the completion of roads and paving-stone walkways in Stage One, and drilling of the 570 boreholes that make up Blatchford’s geoexchange field. Take a closer look in our video below at the District Energy Sharing System construction and learn about how the geoexchange field will be used to provide heating, cooling and domestic hot water to residents and businesses.

Curious how Blatchford residents will get their heating, cooling and domestic hot water in an environmentally-friendly way? Here’s a look at the first step in building the District Energy Sharing System – the geoexchange field.

The first Energy Centre for the community is also under construction this year. Crews made huge strides by completing the extensive underground base and building the ground level platform. The Energy Centre will house the major equipment needed for the District Energy Sharing System to operate.

Throughout the winter months, construction on the Energy Centre will continue, along with electrical utility installation to support the connections needed between the Energy Centre and Stage One of Blatchford West. The community’s first street lights are also being installed throughout Stage One. 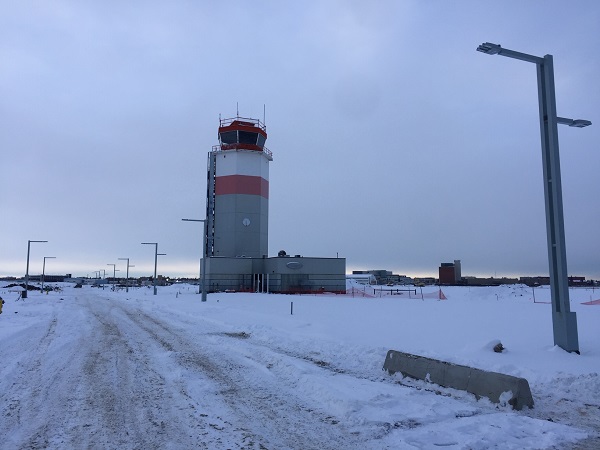 Blatchford’s first street lights are being installed! It will be a few months before they’re lighting up the neighbourhood but we know the former Air Control Tower is excited to have company in the sky above Stage One.

As a part of the vision for Blatchford, residents will be able to pop on the LRT in their neighbourhood to reach destinations across Edmonton. A significant milestone was achieved by the Province of Alberta and the City of Edmonton on November 1, 2018, when they announced provincial funding support for the Metro Line and Valley Line West Line. 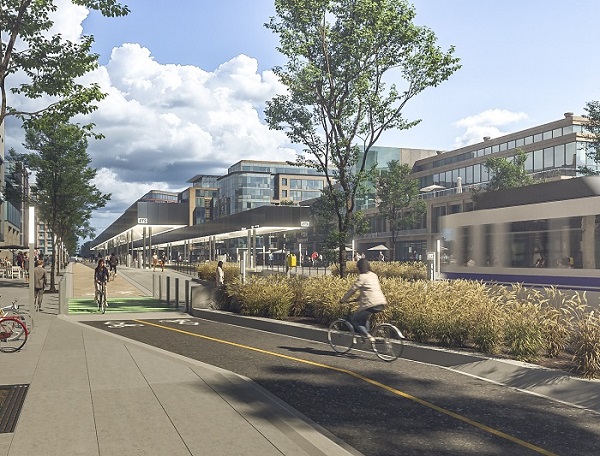 Conceptual rendering of a new Metro line station in Blatchford.

Solar in a Box

A new addition to the construction trailers in Blatchford this summer was a white metal shipping container with the bright, red maple leaf logo of “Great Canadian Solar”. The recycled shipping container is the result of the hard work of two NAIT graduates, renewable energy technologist Csilla Harsasi and classmate Aaron Mcgregor. The container is much more than a storage unit; it has the power to reduce greenhouse gas emissions and bring power to construction sites almost anywhere.

The array powers two office trailers for one of Blatchford’s site contractors, Chandos Construction. It replaced two large propane generators, cut greenhouse gas emissions and saved about $1,200 a month in fuel. Learn more through the video below and blog post on our website.